This file contains ambiguous Unicode characters that may be confused with others in your current locale. If your use case is intentional and legitimate, you can safely ignore this warning. Use the Escape button to highlight these characters.

Maple is my personal experiment with lukalabs' Cakechat program. I've added discord.py support, sentiment analysis with the TextBlob library, and there is more to come.

The recommended python version is 3.6.8 for all dependencies to match up well. Clone the repository and run "pip install -r requirements.txt".
Then, open "tools/discord_bot.py" and change the discord API token to your application's bot token.
If you do not have a discord bot, you can get one here: https://discordapp.com/developers/applications/

Currently it uses lukalabs' pretrained model until I can get hardware sufficient to train it myself.
Run "python tools/download_model.py" to download the pre-trained model.

CakeChat is a chatbot that is able to express emotions via conversations. Try it online! 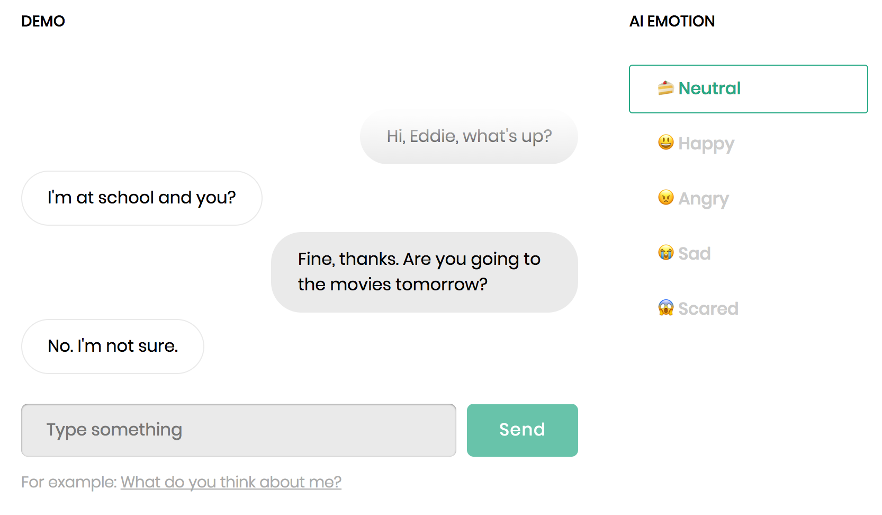 CakeChat is built on Keras and Tensorflow.

The code is flexible and allows to condition model's responses by an arbitrary categorical variable. For example, you can train your own persona-based neural conversational model[1] or create an emotional chatting machine[2]. 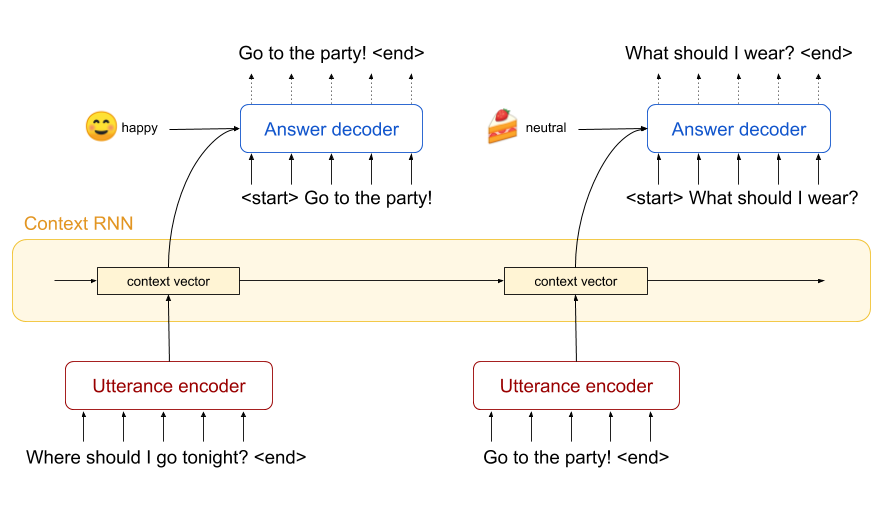 In case you are familiar with Docker here is the easiest way to run a pre-trained CakeChat model as a server. You may need to run the following commands with sudo.

That's it! Now test your CakeChat server by running the following command on your host machine:

Setup for training and testing

Docker is the easiest way to set up the environment and install all the dependencies for training and testing.

Note: We strongly recommend using GPU-enabled environment for training CakeChat model. Inference can be made both on GPUs and CPUs.

That's it! Now you can train your model and chat with it. See the corresponding section below for further instructions.

If you don't want to deal with docker, you can install all the requirements manually:

We recommend installing the requirements inside a virtualenv to prevent messing with your system packages.

Getting the pre-trained model

You can download our pre-trained model weights by running python tools/fetch.py.

The params of the pre-trained model are the following:

The model was trained on a preprocessed Twitter corpus with ~50 million dialogs (11Gb of text data). To clean up the corpus, we removed

We used our emotions classifier to label each utterance with one of the following 5 emotions: "neutral", "joy", "anger", "sadness", "fear", and used these labels during training. To mark-up your own corpus with emotions you can use, for example, DeepMoji tool.

The training data should be a txt file, where each line is a valid json object, representing a list of dialog utterances. Refer to our dummy train dataset to see the necessary file structure. Replace this dummy corpus with your data before training.

There are two options:

The first approach is less restrictive: you can use any training data you want and set any config params of the model. However, you should be aware that you'll need enough train data (~50Mb at least), one or more GPUs and enough patience (days) to get good model's responses.

The second approach is limited by the choice of config params of the pre-trained model – see cakechat/config.py for the complete list. If the default params are suitable for your task, fine-tuning should be a good option.

Fine-tuning the pre-trained model on your data

Weights of the trained model are saved to results/nn_models/.

Training the model from scratch

Weights of the trained model are saved to results/nn_models/.

For example, run python tools/distributed_train.py -g 0 1 to start training on 0 and 1 GPUs.

During training the following datasets are used for validations metrics calculation:

The metrics are stored to cakechat/results/tensorboard and can be visualized using Tensorboard. If you run a docker container from the provided CPU or GPU-enabled docker image, tensorboard server should start automatically and serve on http://localhost:6006. Open this link in your browser to see the training graphs.

If you installed the requirements manually, start tensorboard server first by running the following command from your cakechat root directory:

After that proceed to http://localhost:6006.

You can run the following tools to evaluate your trained model on test data(dummy example, replace with your data):

Run a server that processes HTTP-requests with given input messages and returns response messages from the model:

Specify CUDA_VISIBLE_DEVICES=<GPU_ID> environment variable to run the server on a certain GPU.

Don't forget to run python tools/fetch.py prior to starting the server if you want to use our pre-trained model.

To make sure everything works fine, test the model on the following conversation

by running the command:

You should get a meaningful answer, for example:

We recommend using Gunicorn for serving the API of your model at production scale.

You can run your CakeChat model as a Telegram bot:

By providing additional condition labels within dataset entries, you can build the following models:

To make use of these extra conditions, please refer to the section Training the model. Just set the "condition" field in the training set to one of the following: persona ID, emotion or topic label, update the index files and start the training.

CakeChat is developed and maintained by the Replika team:

All issues and feature requests can be tracked here – GitHub Issues.